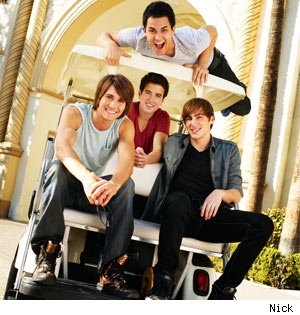 This is about BTR on nick, their music, and episodes!

Big Time Rush is a Nickelodeon TV Show that premiered on Nick in 2009 as a 1-Hour Special Sneak Preview Event. There will be a soundtrack based of Season 1 of the show in Fall 2010. Look out for the DVD "Big Time Rush: The City is Ours" coming soon on DVD August 2010! Featuring a Never Before Seen episode and music videos. Also, Look out for the TV Movie: Big Time Movie Premeire. Coming Soon to Nick!

Retrieved from "https://gottaliveitbig.fandom.com/wiki/Big_Time_Rush_Wiki?oldid=3873"
Community content is available under CC-BY-SA unless otherwise noted.